In 1978, Kent Tekulve took over as the Pirates ace reliever after Goose Goosage signed with the Yankees. You’d be hard pressed to find two more different righthanded pitchers Goosage was a big guy with a great fast fastball, an intimidating figure on the mound. Tekulve was an tall but amazingly thin, a submariner who wore glasses and looked completely out of place on a baseball diamond. But he was just as good as Goosage, thank to his funky delivery and his pinpoint control.

I always like unusual pitchers, so I was a big Kent Tekulve fan as a kid. Even now, I still have fun imitating his delivery while I’m warming up before playing softball. For me, he’s still the ultimate submariner.

Tekulve and Goosage were not closer in the modern sense of the term. They didn’t pitch only in the ninth innings and in save situations. They were reliever who pitched in close games, often for two or three innings. They were much more useful to their team than the prototypal modern closer simply because they pitched far more innings. Maximizing the number of saves was not the priority. In 1978 and 1979, Tekulve pitched 135 innings for the Pirates but notched "only" 31 saves both years. 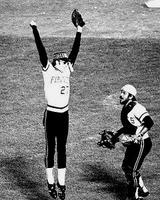 This was perfectly exemplified in the 1979 Word Series that the Pirates won over the Orioles. In the seven games series, Tekulve pitched five times, logged 9 1/3 innings and saved three games. In game 1, he pitched one inning in to save a 3-2 win. In game 3, he pitched two scoreless innings (the 8th and 9th) in an 8-4 loss. In game 4, the Pirates held a 6-3 lead when he entered the game in the 8th inning with the bases loaded and one out. The Orioles ended up scoring six runs against him to win the game 9-6. Tekulve was the losing pitcher. In game 6, he pitched the last three innings in 4-0 win to notch his second saves of the series. And in game 7, he took the mound in the 8th with two runners base to protect a 2-1 lead. He got out of the jam and pitched a perfect nine to get his third saves a World Series ring. Now, that's managing an ace reliever as far as I' concerned.
Publié par Barclay à 16:19

Hi, I liked your blog its my first time here! If you are interested, go see my Tai Chi related site. Its purley for peoples health.

All the best John

Very Nice. I am really impressed with the great blog you have here! I was wondering how long you have been doing this?

How about an 83 Yr Old Lady that could not stand and had to be carried back and forth to the bathroom and on a Thursday evening in 15 minutes she was not only able to stand, but also walked across the room just holding onto her daughter's arm. The next night, she and her daughter were arm wrestling and for several minutes were locked in the center position. Her daughter the next day said "That was my mom's WEAK arm" :-)

Come and check out our LifeWave Energy
Patch site/blog if you are interested in getting more energy and or sleeping better than you have in years, and I think you will be very impressed also :-)